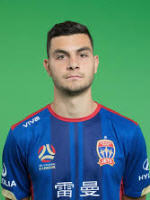 Two early second half goals for Bromsgrove Sporting were not enough to salvage anything at Peterborough Sports on Saturday afternoon, as the Rouslers lost 3-2.

Appearances on the scoresheet for Shaquille McDonald and Mikey Taylor came after a horror first half for Bren Kelly's men, as goals from Joshua Moreman, Dan Lawlor and Mark Jones ultimately left Bromsgrove with too much of a mountain to climb.

The opening 20 minutes were quite even; a curled Moreman effort from the edge of the area skimmed the crossbar, whilst Jones dragged a shot wide from a similar position. Sporting's best opportunity in this period began with new addition Gift Mussa winning the ball in midfield - a counter attack ensued, but McDonald smashed a drive straight at Peterborough keeper Lewis Moat.

The opener came 21 minutes in. Moreman found himself in a good position but his shot from just shy of 20 yards lacked any real pace; fortunately for him, the ball squirmed under a diving Jono Brown and managed to roll its way in.

The lead was doubled six minutes later; Jack Wilson was adjudged to have brought down Abduramane Sano Sali in the area, with Lawlor sweetly striking the resultant spot kick into the bottom corner.

The nightmare first half showed no signs of getting better, with Jones bagging the third in the 36th minute. Leon Broadhurst endeavoured to shield off the dangerous Sano Sali, which caused Brown to try and deal with the situation by clearing the ball, but could only manage to scuff the ball into the path of Peterborough's captain, who poked home into an open goal.

Sporting began the second half in the best possible way; just two minutes, Greg Mills cut inside from the left and saw his shot parried to McDonald, who converted from no more than a couple of yards out.

The away team's second came seven minutes later; a quick Josh Quaynor free kick was played through to McDonald, who neatly lifts the ball over Moat, allowing Taylor to bundle the ball into an empty net from close range.

McDonald had a huge opportunity to level proceedings with a little under 15 minutes remaining. Taylor held up the ball well and set up McDonald, who fired a powerful one on one but could only find the side netting.

In the closing stages, Sano Sali and substitute Avelino Vieira both had shots blocked for the Turbines and with Sporting unable to truly test Moat in the final moments, the score would finish 3-2 to Jimmy Dean's men.