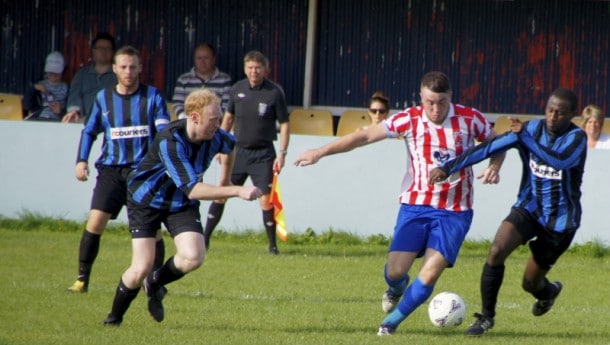 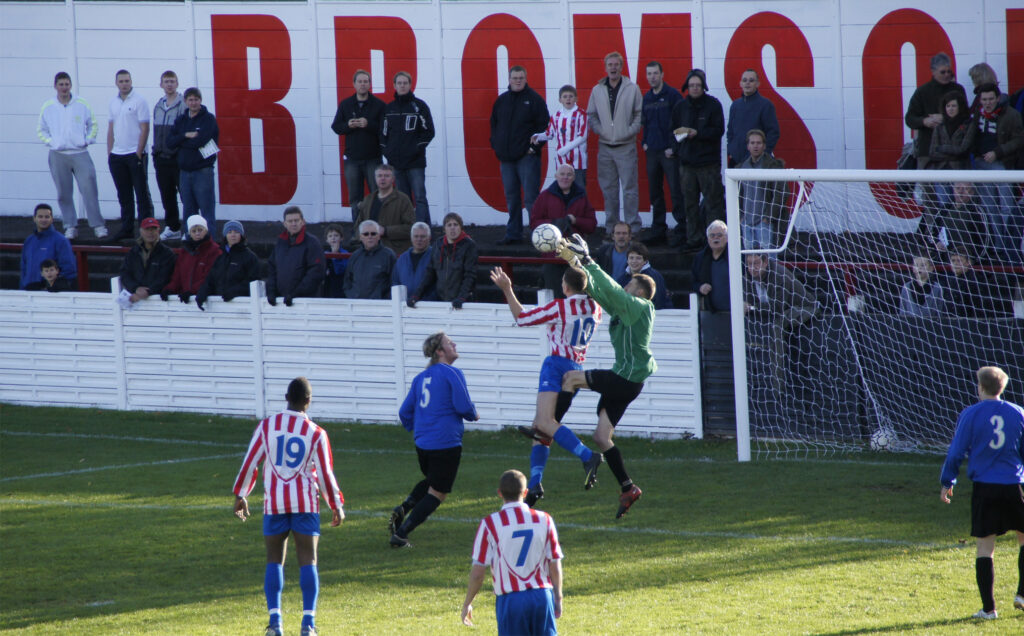 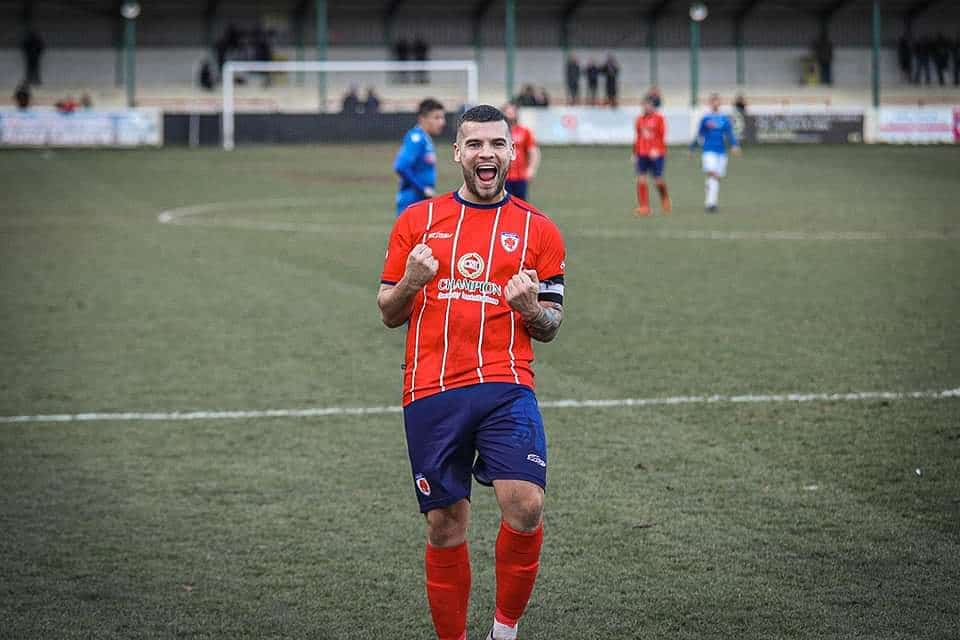 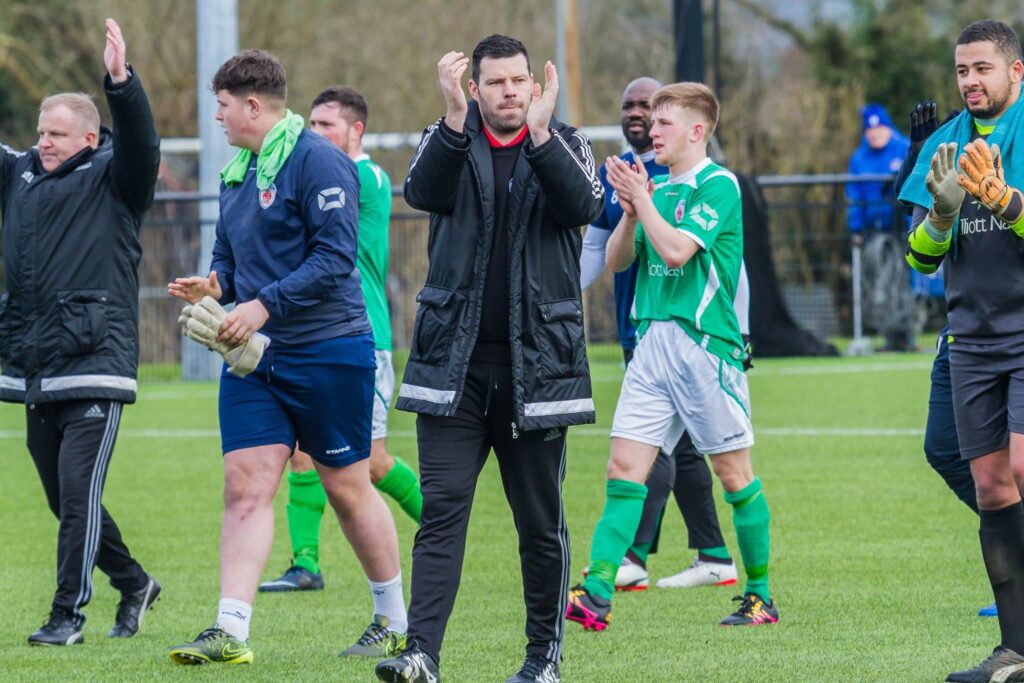 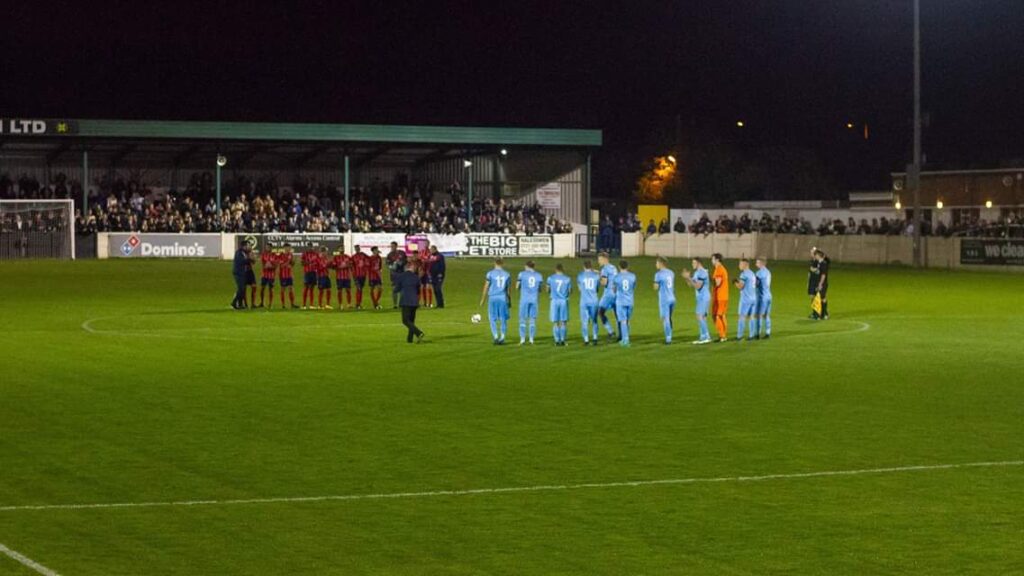 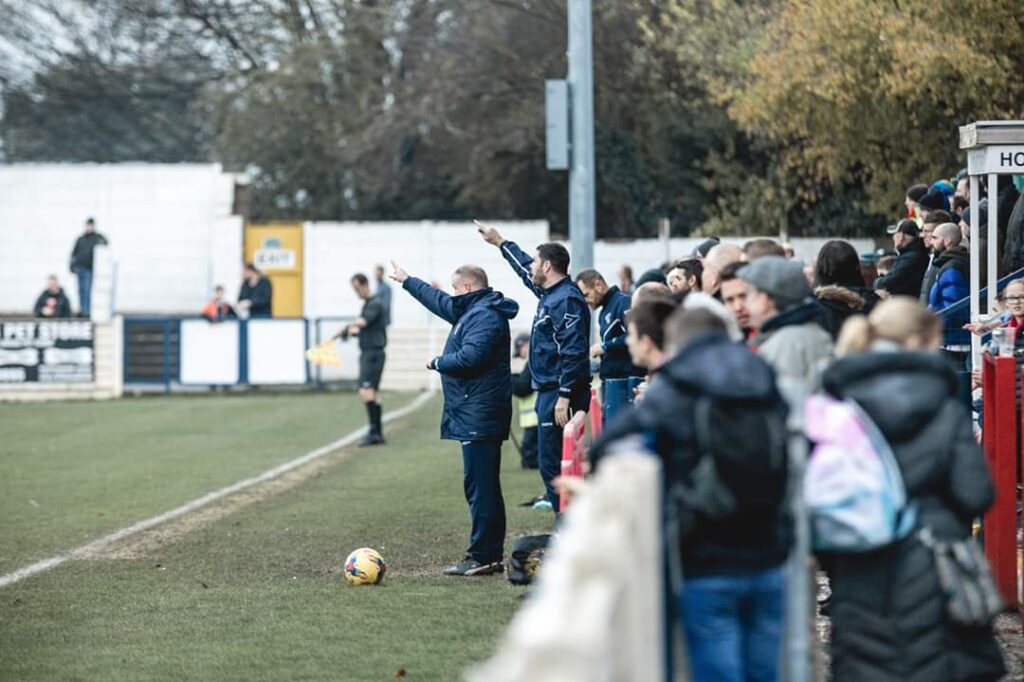 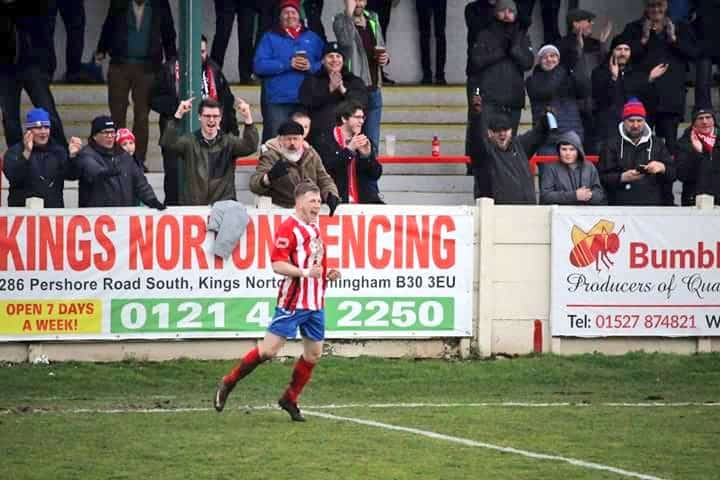 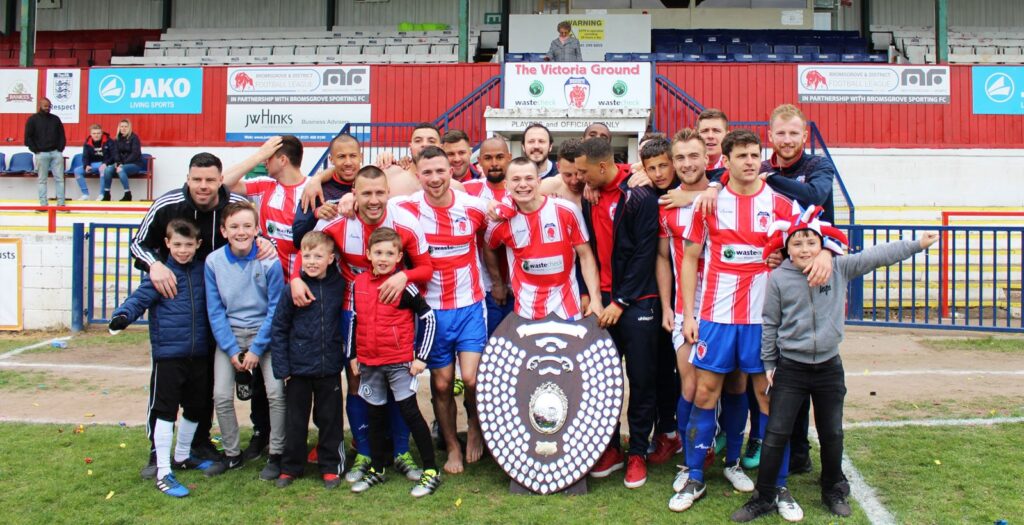 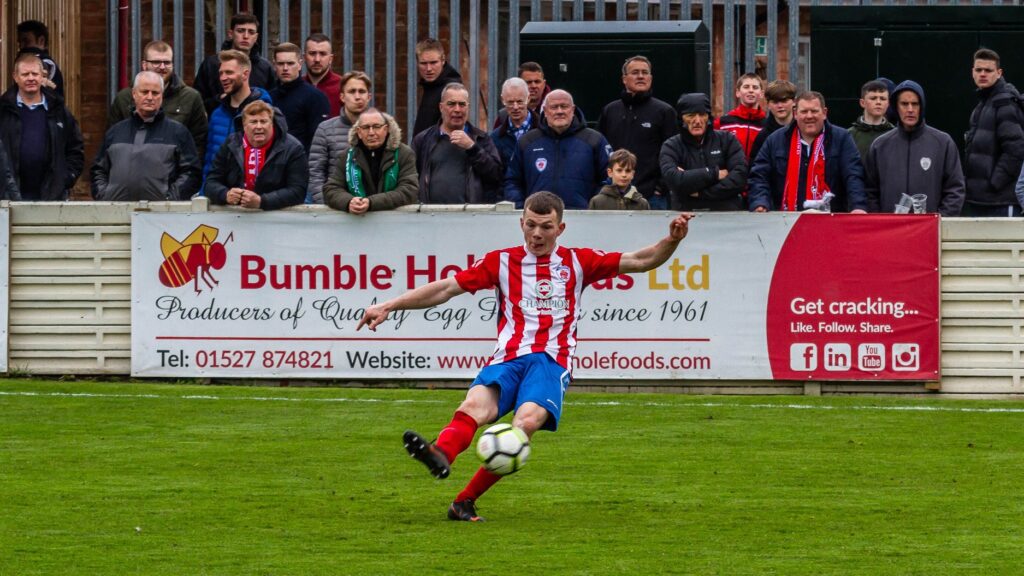 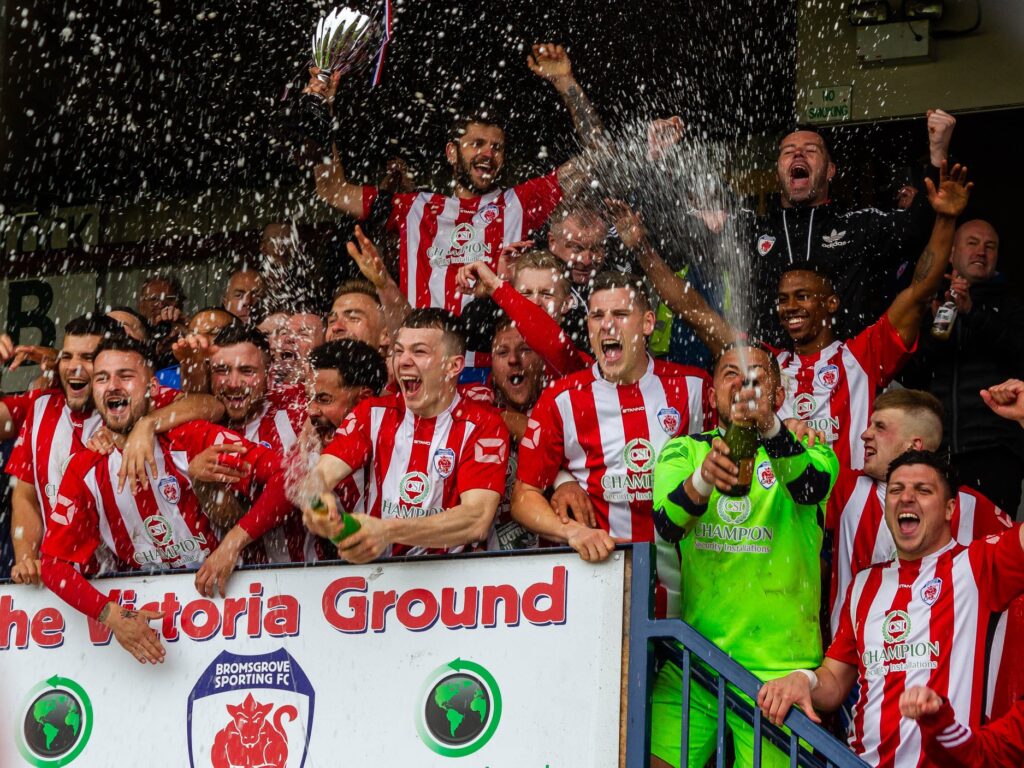 Bromsgrove Sporting Football Club was formed in 2009 by a group of former Bromsgrove Rovers directors and supporters when the latter was in serious financial difficulty and facing closure. That would have meant the town having no football club playing at a serious non-league level. The Club has an unusual constitution with a rule that nobody can own more than 10% of the Club to ensure that nobody ever gains overall personal control. In addition, the Bromsgrove Sporting Supporters Trust has a stake in the Club and appoints three directors.

With Rovers’ difficulties deepening, Sporting were offered the tenancy of the town’s Victoria Ground by the District Council but had to play all home matches at the Beehive, home of Studley FC, as the pitch at the Victoria Ground had been left in an unplayable condition.

Their first ever match (a pre-season friendly) was away to Stratford Town in July 2010 then a month later the season started in the Midland Combination Division Two away to Young Warriors in Coventry. After a lot of work and expenditure, Sporting were able to play their first match in Bromsgrove on 6th November in front of a crowd of 458 and ran up an impressive and unforgettable 7-0 win against Greenhill.

Up to that point Myles Day had been the manager but he resigned due to family and work commitments and was replaced by former Rovers legend Stewart Brighton. Sporting missed out on the two promotion places but a re-organisation of the Midland Combination saw them move into Division One for season 2011/12.

Not long after the start, Brighton stood down owing to work commitments and was replaced by Keith Draper as manager with Ron Mellor as his assistant. They finished 3rd in the division and got to their first cup final losing the Evesham Hospital Junior Cup to Littleton on penalties. Although missing out on automatic promotion, Sporting were promoted to the Midland Combination Premier Division when the League increased the number of teams at the top level.

For season 2012/13, Graham Scott was appointed joint manager to share duties with Keith Draper but Draper stepped down at the end of March leaving Graham Scott assisted by Ron Mellor in charge to the end of the season eventually finishing 6th. Sporting also claimed their first pieces of silverware with the Reserves winning the Midland Combination Reserve Division Two and the Under 18’s claiming County success in the Worcestershire F. A. Youth Cup.

Sporting ended the season 2nd to Brocton and also gained their first cup success in winning the Smedley Crooke Memorial Challenge Cup by beating Paget Rangers. Season 2013/14 also saw Sporting enter the FA Vase for the first time, but bowed out to Westfields after wins against Lye Town and Stafford Town.

After 2 games of the 2014/15 season Adrian Mander resigned as manager and Paul Smith was appointed his successor with Martin Sockett and Nick Smith as his coaches.

Smith guided “The Rouslers” to runners-up in the league for the second season. They also lifted the League Cup at Walsall’s Bescot Stadium beating Southam United 3-2 in the final. Sporting also competed in the FA Cup for the first time but bowed out to Coleshill Town after a replay. In the FA Vase Sporting progressed to the 3rd. Round before losing to Thurnby Nirvana.

2015/16 saw “The Rouslers” as the bridesmaids again, finishing second in the Midland Football League Division One to Coventry United, despite gaining a club record 91 points. In both the Worcestershire Senior Urn and the Smedley Crooke Memorial Challenge Cup, Sporting were losing finalists.

Season 2016/17 was Sporting’s most successful to date winning the league with 104 points (19 ahead of their nearest rivals Hinckley AFC) and remaining undefeated for the whole campaign. In addition, they reached the semi-finals of the FA Vase before losing narrowly 2-1 on aggregate to Cleethorpes Town. They were also awarded the Worcestershire Senior Urn for the first time despite losing the final on penalties to Highgate United who were subsequently disqualified. The season also saw a vast increase in the support for Sporting with several crowds of over 1000 including a record 3349 for the home match against Cleethorpes.

Season 2017/18 sees Sporting playing in the Midland Football League Premier Division for the first time. Paul Smith, who guided the Rouslers to the Premier Division, stepped down as Manager in February 2018, which saw Assistant Manager Brendan Kelly take over as First Team Manager, while Andy Mason became his Assistant Manager. Kelly and Mason brought in a very experienced first team coach, Kevin Barry, who is currently the manager of the RAF Senior Representative Football Team. The Rouslers were crowned champions that season of the Midland Football League Premier Division in 2017/18 and also took home the Worcestershire Senior Urn for the second season in a row.

In 2018/19 – Sporting’s first season at Step 4 of non-league football, Bren Kelly and Andy Mason lead the Rouslers to a third successive promotion via the play-offs in a crazy final game against Corby Town, where Sporting ran out 4-3 winners after extra-time. The third promotion in a row means that Bromsgrove Sporting will be playing in the BetVictor Southern League Premier Division Central in 2019/20.

The 2019/20 season was eventually declared null and void due to the COVID-19 pandemic, thus meaning, the 2020/21 season would start with the same league structure. 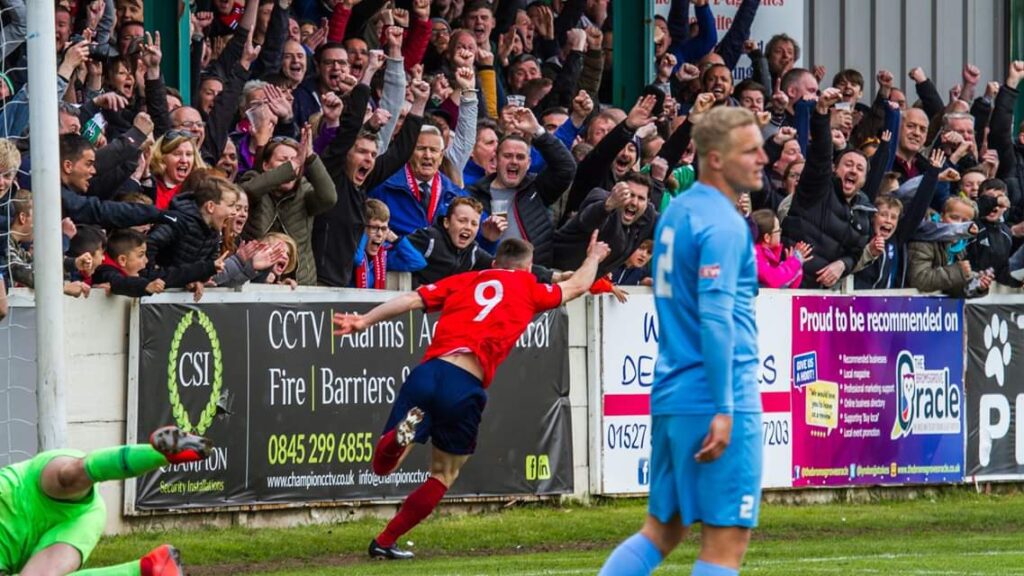 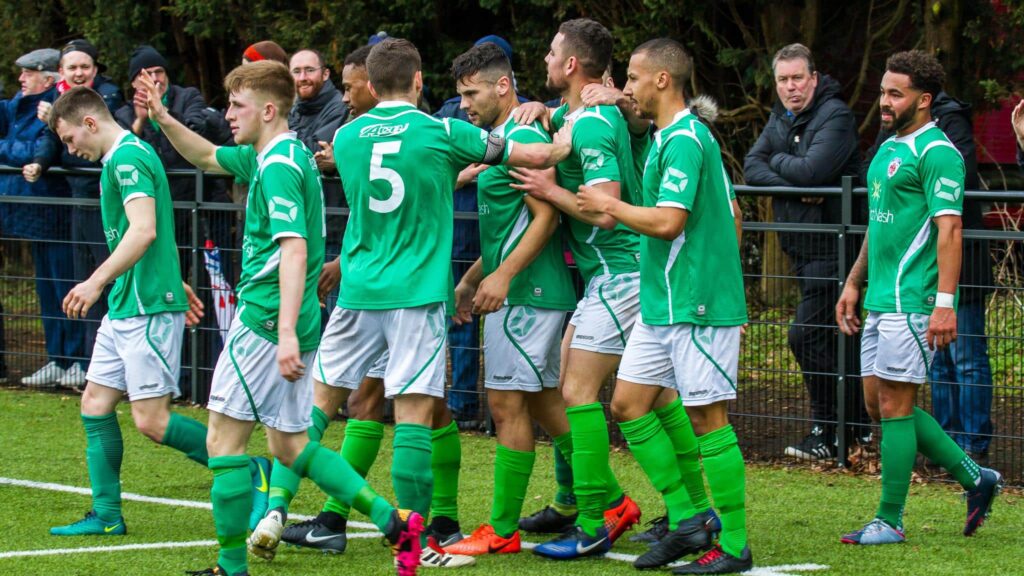 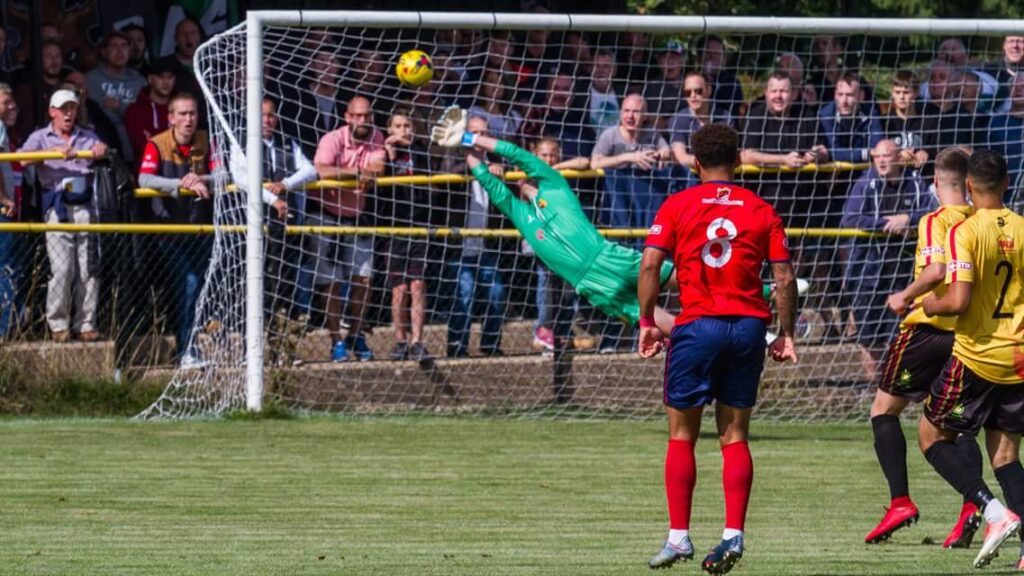 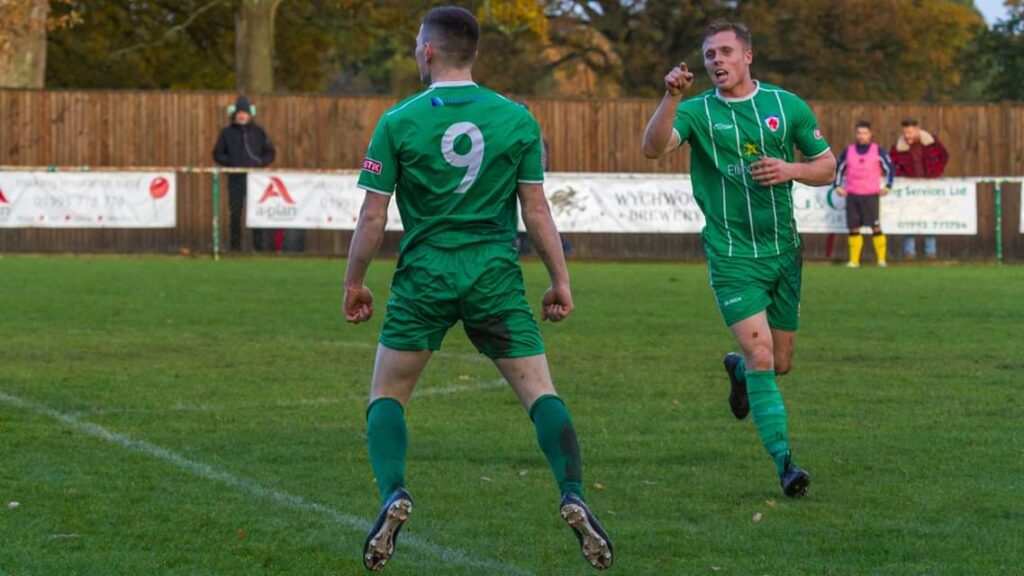 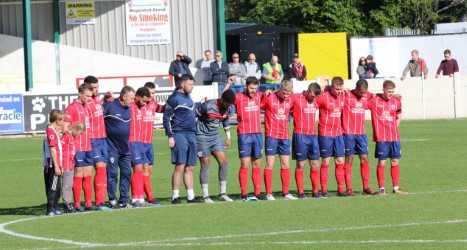 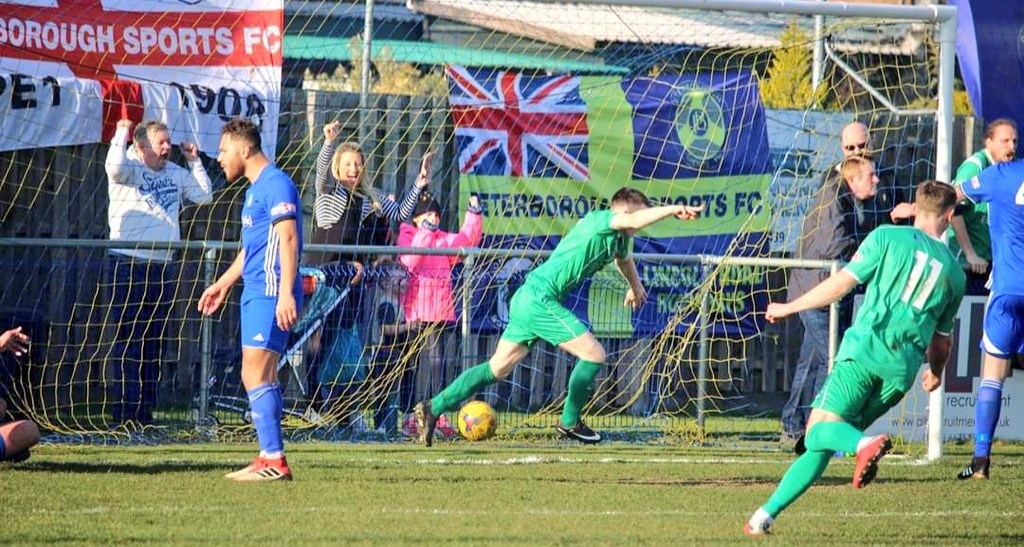 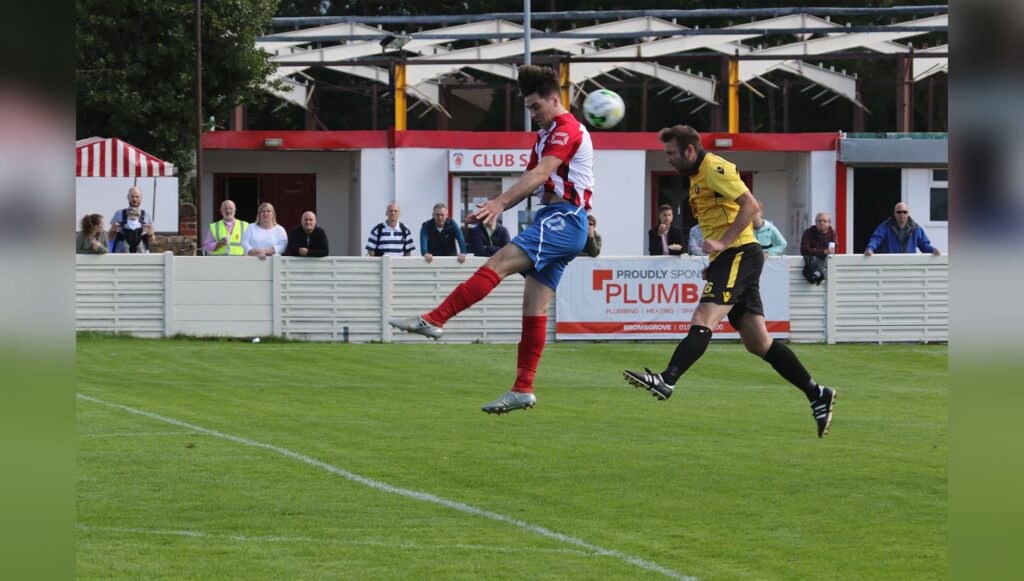 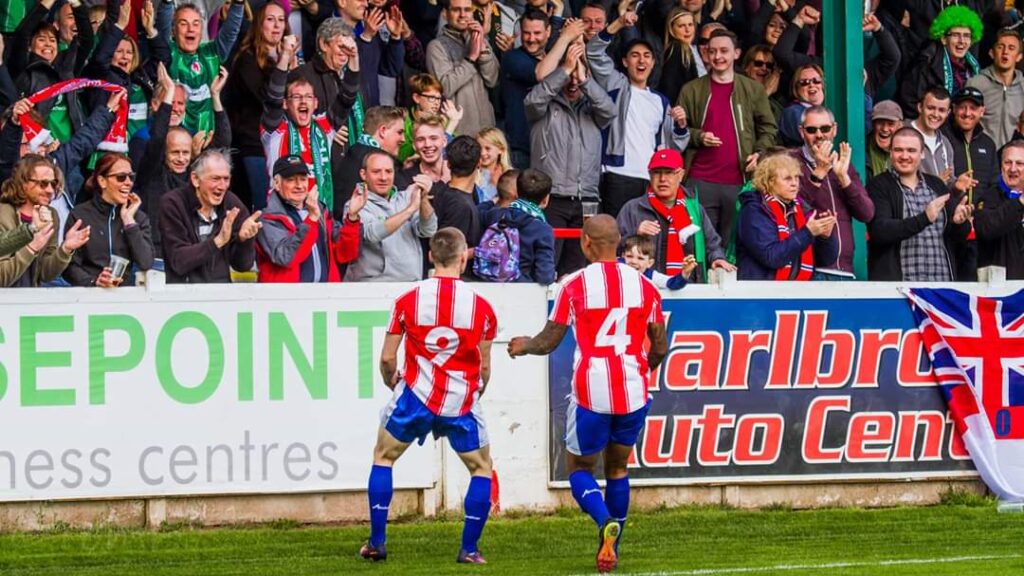 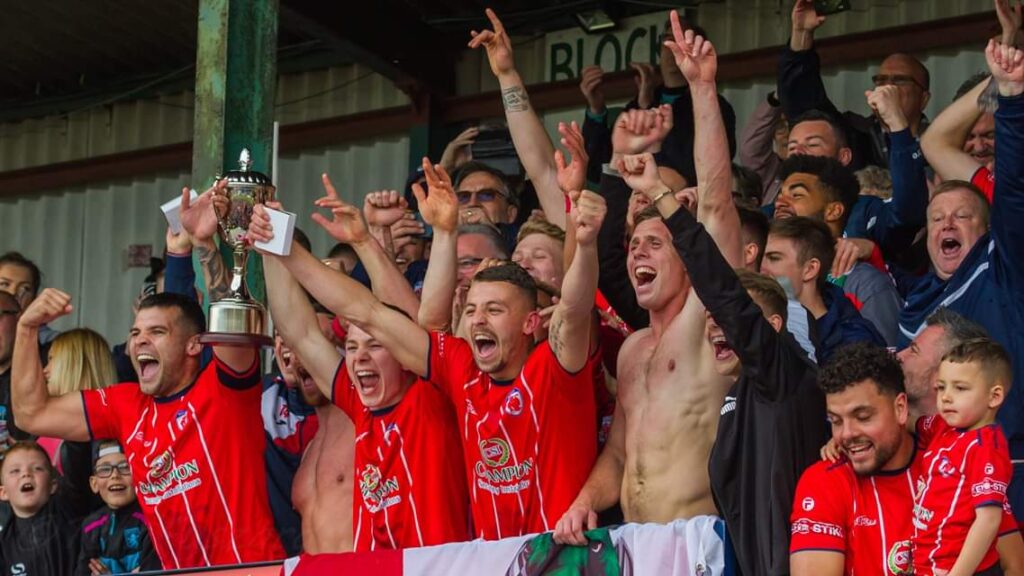 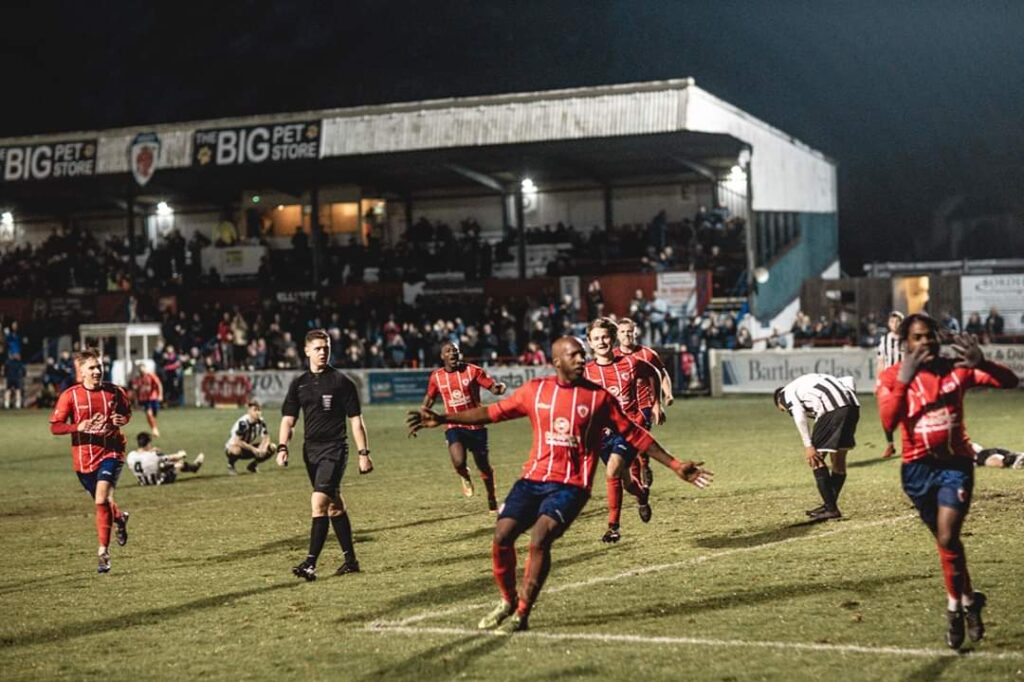