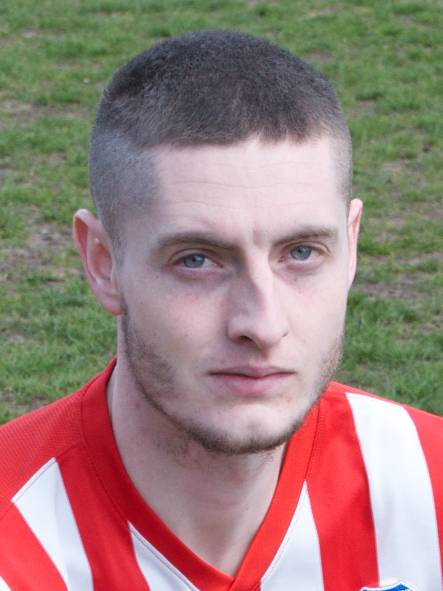 Craig Jones, wearing the captain's armband led his team out on to a windy and rain-soaked Five Acres pitch for his 100th appearance in a Sporting shirt. A proud moment for the dependable centre-back.

Since their formation Sporting have played Littleton more than any other team having won 6 encounters, drawn two whilst their opponents have won five times. So not much to choose between them over the last five years in all competitions and a bit more than just 3 points to play for.

With conditions far from ideal but the pitch playable, Sam Wills was the first Sporting player in action with a strong challenge on Callum Clarke in the first minute earning him a yellow card. The home side looked to be a bit sharper in the opening exchanges with Robbie Bunn twice getting behind the away defence but failing to trouble Chris Jay between the sticks.

Former Rousler Chris Conway lined up for Littleton and played his familiar game of chasing balls into the box that earned him so many goals at the Victoria Ground. Unfortunately one challenge on Jay on the 16th minute was a little late resulting in the keeper having to have lengthy treatment before play resumed. Conway was fortunate to avoid a booking.

Littleton continued to have the slightly better of the play with Bunn and Kyonn Evans dealing with the wind and variable bounce a little better but they still failed to get anything on target.

At the other end Sean Brain and Dale Edwards tied up the Littleton back four and it was Brain who had the best effort on the first half when his shot from 15 yards out was tipped over by Haydn Whitcombe.

On a heavy pitch it was unlikely that the home side could continue their close marking for 90 minutes and with Sporting moving the ball around quickly the game opened up allowing somewhat more fluid play, fluid being the operative word with the rain lashing down!

That tactic finally paid dividends for Sporting on 56 minutes. Reece Hewitt made a weaving run into the Littleton box beating two defenders before side-footing to Kyle Turner who easily tapped home from just 8 yards out.

Littleton knew they had to do something and in a good ten minute spell saw Conway force Jay to a low save whilst a quick move up-field allowed Dean Poulson to outpace the Sporting defence but his shot went over the bar.

Sean Brain was continuing to cause problems playing wide and with 79 minutes on the clock he made a swerving run down the left pulling the ball back to Sam Wills who lined up a precise shot into the corner of Whitcombe's net for Sporting's second.

Two minutes later The Rouslers got their third with a Sam Wills free kick that was chipped over the wall into the top corner well beyond Whitcombe's gloves.

Poulson thought he may have got something back for the home side but his penalty appeal was turned down with three minutes to go.

However it was Sporting who nearly had the last of the action but Jack Wilson's shot hit the post with a minute of added time played.

In his post-match comments manager Paul Smith said "It was quite an even game in the first half but we improved in the second and I was pleased with the final result".

No midweek match for Sporting so the next game is a much-anticipated re-match with Hinckley AFC next Saturday, this time in the league and revenge for the 6-2 exit at their hands in the FA Cup back in August will be at the front of their minds.