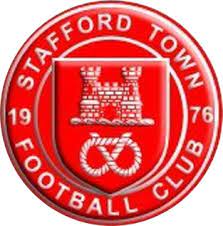 A brace from Chris Lloyd early in the first half followed by a couple more in the second gave Sporting three more valuable points despite a rally by the home side in the later stages of the match writes Phil Baker.

Playing in warm sunshine on the artificial pitch at Evans Park, Sporting coped well with the unfamiliar surface and dominated the game from the outset.

The first chance went to Lloyd on the 6th minute but he blasted his effort over the bar. However one minute later he made no mistake. Captain Craig Jones send an inch-perfect pass from the centre-circle out to Lloyd on the wing who spotted a gap in the home defence making a diagonal run into the box before unleashing a powerful drive that gave ‘keeper Josh Moreton no chance as it sailed in the top corner of his net.

Stafford pushed forward and had their best chance of the half on the 17th minute when Yann Edimo sent a well-flighted free kick from just outside the penalty area over the Sporting wall but Jon Brown was well-positioned to make an easy catch.

Two minutes later Sporting doubled their lead when Jason Cowley received the ball just inside the box out left, dummied one defender before rattling the bar, Stafford failed to clear and Lloyd picked up the loose ball burying it in the top left hand corner of Moreton’s net.

The lively striker could have had two more shortly after but both headers went just over the bar.

Stafford came out more energetic in the second half but despite putting together some neat moves, failed to get past the Rouslers back-wall and gave Brown little to worry about.

Alfie Bloomer came on as substitute midway through the half and played his usual game or scurrying round like a terrier harassing defenders and getting a deserved goal on the 77th minute when he blasted home a loose ball after Moreton failed to hold the diminutive striker’s neat shot from short range.

Three minutes later Stafford forced Brown in to action, again from a free-kick this time taken by Ashleigh Raymond who curling effort from 35 yards was tipped round the post.

Sporting’s final goal of the afternoon came six minutes from time and unluckily for Stafford centre-back Tom Wright who slid Robbie Bunn’s cross past his own ‘keeper.

So Sporting now need a maximum of 3 wins from the lat 7 matches to secure the championship and promotion. In addition they remain undefeated in the league and have won all 13 league matches since the New Year.

After the match manager Paul Smith summed up proceedings "We were playing on a plastic patch that we were not very fond of but we got the job done, three more points and now look forward to next Tuesday’s six-pointer against Leicester Road".