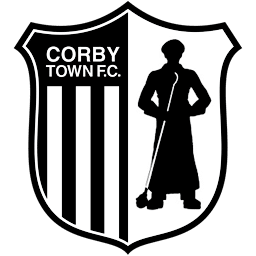 A second heavy defeat in five days for Sporting and there were some bright moments but the better teams will punish even the slightest of errors and that is a lesson to be learnt.

After last Saturday’s defeat at Bedford, there was a change of formation with Tom Taylor making his debut in a three-man central defence and Jake Heath making his first start in mid-field.

Both teams pretty much cancelled each other out in the early stages of a match played at a fairly hectic pace on a wide pitch. However the crunch came on the 13th minute when Dan Crane in goal for Sporting conceded a corner and from the resulting place kick Joel Carta headed home unmarked from close range.

Six minutes later Gary Mulligan hit the post for the home side following Connor Kennedy’s long throw. However Corby made no mistake on the 45th minute when Sporting failed to clear their lines and a loose ball came out to Jordan Francis who scored a beautiful goal from fifteen yards out curling the ball into the top right-hand corner of Crane’s net.

Richard Gregory replaced Cameron Peters up from for the Rouslers at the start of the second period to bolster Sporting’s attacking options but before he could do much, his side were three down when Sam Grouse slide a loose ball under Crane.

The Steelmen’s fourth came on 51 minutes courtesy of Elliot Sandy who had enough time to pick his spot from the edge of the goal area whilst number five came from Miles Smith who made a blistering run down the right before hitting an angled drive past Crane.

Sporting did press forward but a tight and well-organised Corby defence kept chances to a minimum. Gregory went down on the box on 66th minute but it was an easy decision for referee Mr Ricardo to wave, no foul.

The final score of the evening for Corby came on the 72nd minute with a beautifully taken corner from Francis who found Sam Warburton at the far post, he nodded the ball in front of the goal where Sandy was able to tap in.

Sporting did rally for the last few minutes with Jason Cowley working hard up front but none of his efforts troubled Dan George in the home goal.

So another chastening experience for Sporting who will go home and lick their wounds but there is nothing wrong with the squad or individual players, they just need to realise that they are playing at a higher level of football and improvements will come.