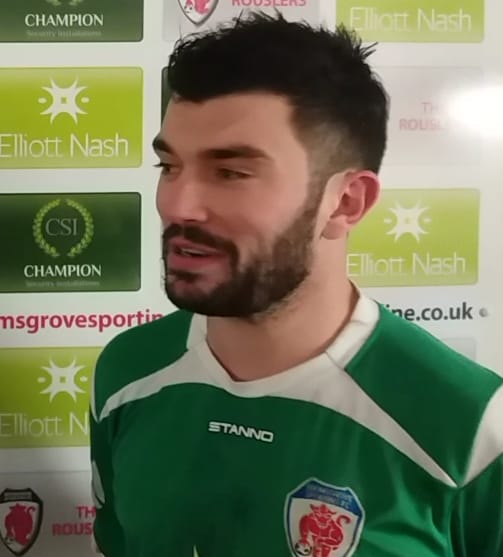 The visitors won 4-2 in the shoot-out after Sporting’s Liam Holt and Dan Preston missed from 12 yards out, with Joel Dielna hitting the winner with Town’s final penalty.

It looked as though Dino Maamria’s Town had set up a home clash against League One side Walsall two minutes from the end when Kairo Mitchell smashed home from close range.

But the Rouslers once again showed their never-say-die attitude to force the equaliser in the third minute of stoppage time when skipper Craig Jones directed his header from Holt’s free-kick into the far corner.

The result seemed harsh on Sporting who proved to be more than a match for their opponents, who ply their trade three levels above the Midland League Premier Division.

And it was the visitors who got the first chance of the game after nine minutes but Billy Daniels could only curl his free-kick from 20 yards out wide of the near post.

But back came Sporting as Holt tested Elliot Taylor from range, with the Town keeper less than convincing with the save, pushing it behind for a corner kick which was subsequently cleared.

Holt was again involved midway through the half as brilliant tackle on Dielna allowed the hosts to counter with Loveridge who could only fire his left-footed shot straight at Taylor.

At this point Sporting were well on top but lacked that little bit of quality in the final third to capitalise as both sides went into the break level.

The second half was much more action-packed and Deards will be wondering how he did not nose the Rouslers ahead eight minutes after the interval.

A superb reverse pass from Brain allowed Jason Cowley the time and space to pick Deards out at the back post whose initial shot was tipped onto the post by Taylor before the rebound was forced over the bar for a corner.

Despite their dominance, Sporting almost fell behind 15 minutes from time but a block on the line by Jones prevented Ryan Richmond from scoring after the Town substitute had rounded keeper Reece Francis.

But with two minutes remaining, there was heartbreak for Sporting when Andre Olukanmi forced his way to the byline before squaring the ball to Mitchell who curled home at the near post.

However, four minutes later the hosts claimed a dramatic equaliser.

A needless foul on Jack Wilson by Ashley Elliott gave Holt the opportunity to whip in a delicious free-kick which was met by Jones whose flicked header nestled into the far corner to force penalties.

Quaynor and Cowley scored their penalties but Town were handed the advantage after Holt’s spot-kick was saved by Taylor, giving the visitors a 3-2 lead.

Francis then saved Jean Jhonnes’ effort to give Sporting the chance to draw level.

However, Preston could only blaze over before Dielna stepped up to drill home the winner.