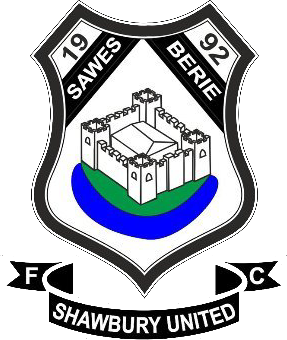 Shawbury United are one of the newer clubs in the West Midlands region, having been formed in 1992. They started out playing in the Shrewsbury and Shropshire Alliance Division Two. They swiftly progressed up the divisions, winning a number of local cups along the way, and in 1999-00 the club were rewarded with admission to the West Midlands (Regional) League, initially in Division One North. In 2000–01 they were promoted to the Premier Division, and then to the Midland Football League in 2016, where they remain to this day.

2006–07 was a disappointing season for Shawbury in which the club finished bottom of the West Midlands Premier Division in 21st position, however due to Great Wyrley resigning from the league early on and Wyrley Rangers folding at the end of the season Shawbury avoided relegation. The following season 2007–08 was a totally different story. With Shawbury paying players for the first time, manager Delwyn Humphreys was able to steer the club into the higher reaches of the division and a run to the last 32 of the F.A. Vase (a club record). In what was to be a dramatic and bizarre ending to the season, Humphreys resigned as the season entered its final weeks. Paul Mellings took over the reins and helped Shawbury to equal their best finish of 3rd, despite other teams having many games in hand on Shawbury at one point. However Bewdley Town who had finished 2nd were deducted 3 points for a breach of the rules. This brought Bewdley back to the same points as Shawbury but Shawbury would finish in 2nd place with a goal difference +1 better than the Worcestershire side.

In June 2008 Ally McHarrie was appointed as the clubs new manager for 2008–09, but his tenure did not live up to the previous seasons achievements and he was sacked just after the turn of the year, with the side lingering in lower mid-table and out of all the more prestigious cup competitions in the early stages. After a slight upturn in form towards the end a disappointing season finished with Shawbury in 10th place and long serving player Steve Giles eventually taking the management reins for 2009–10. Life did not get any better for Shawbury, as 2009–10 began with the club bottom of the league after the early stages. In October 2009, the club drafted in Craig Rogers as manager. Previously managing in the Shropshire County League and being young in years (26), it was seen as a gamble by the club. Despite having a good 2nd half to the season they still ended up finishing bottom of the league. They were however saved from relegation and with a pre-season of regeneration approaching they will be hoping for a more successful season next time around.

After an inconsistent season, manager Craig Rogers resigned in March 2011. Despite their troubles his tenure had to be regarded as a success having turned a team that were struggling for points and players to a competitive team in the WMPL. Steve Giles took the reins as caretaker manager until the end of the 2010/11 season.

Shawbury picked up their first win under Giles (and first since 22nd Jan 11) with a 2–1 home victory over Wolverhampton Casuals and a final day win at Wellington confirmed that Shawbury would finish 17th in the league and retain their premier division status.

Dave Richards resigned as Wem Town manager on 7 May 2011 after guiding the club from the Shropshire County league to West Midlands Division 1 in 3 seasons. His appointment as Shawburys new manager was confirmed on Wednesday 11 May 2011. He was joined by his assistant from Wem Town, Shaun Ingram, and after ruling himself out of taking on the managers role, club legend Steve Giles was also a part of the backroom staff. Shawbury United finished the season with a creditable 10th position, and also won the Powell Charity Cup against Mid Cheshire Div Two Side Whitchurch Alport. After Andy Waters stepped down as Reserve team manager at the end of the 2011–12 season, Shawbury appointed Kevin Cooper as Reserve team manager with Shawbury player Eddie Knox his assistant. For the 2012–13 season they were members of the Mercian League Division 1. In June 2012 Chris Kirkup was instated as the new Chairman of the club. For the 2012–13 season Dave Richards remained as First Team Manager in a season that saw Shawbury return to FA Cup action for the first time since the 2009–10 season. Richards was at the helm when Shawbury’s league fortunes took a turn for the better, culminating in the club winning the West Midlands League Premier Division title in 2015/16. The club embarked on their first season in the Midland League Premier Division, and whilst enjoying memorable wins against some of the better teams in the division, including a 5-1 thumping of FA Cup heroes Westfields, they were thankful for a final-day victory at Brocton, which condemned Walsall Wood to the drop instead of Shawbury. Shawbury suffered some off the field woes towards the end of the season, with them leaving their home of over twenty years, the Butler Sports Ground in Wem, and having to relocate to Ludlow Football Stadium, some 40 miles away. Shawbury were not in a position to be able to help pay for new floodlights on their rented ground, and due to the lights then having to be dismantled, had to find another suitable ground, with Ludlow being the only option for them to remain at Step 5.