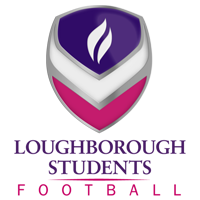 The club was founded in 1920 under the name Loughborough College. They joined Division Two of the Leicestershire Senior League in 1966, where they remained until 1972. The club then left Senior football, and did not return until 2007 when they were promoted to the Premier Division of the Midland Combination. In 2008–09 they won the league's Premier Division, and were promoted to the Midland Alliance. The Scholars ground shared at fellow local side Loughborough Dynamo until moving into the new Holywell Park, Loughborough University Stadium.

In 2011 the club beat Boldmere St Michaels 4–2 to lift the League Cup at Walsall's Bescot Stadium, then won the trophy again the following season when they beat Tipton Town 2–0.

Popular manager Stuart McLaren resigned from his post in 2014 after being announced as the new Stirling Albion manager. Following this, Michael Skubala was appointed as Performance Manager and put former Chesterfield manager John Duncan and Graham Harvey in charge of the 1st team. However they were not able to avoid the club ending in the bottom three of the Midland Football League Premier. Relegation was nonetheless avoided due to Causeway United folding at the end of the season.