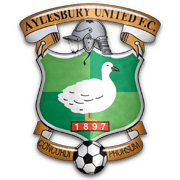 Aylesbury United were founded in 1897 when three local sides: Night School FC, The Printing Works and Aylesbury Town decided to merge. The club, affectionately known as the Ducks due to the famous Aylesbury breed, have experienced some incredible highs over their long 112-year history but now battle for existence without a home ground to call their own.
In the early years United played in local leagues before joining the Spartan League in 1908 where they remained until the Second World War.

1951 saw the Ducks gain their first taste of national publicity as they became the only club from the Delphian League ever to reach the First Round Proper of the FA Cup, eventually losing to Division Three side Watford.

Aylesbury decided to turn semi-professional in 1976 and joined the Southern League, a move which got the ball rolling on the clubs most successful period. A number of events followed which were to help: In 1983 the club appointed Trevor Gould as manager, and then a year later a young local lad called Cliff Hercules made his debut, unaware that he was to become the most successful player in the clubs history. Hercy was, and still is, an Aylesbury icon, and some 20-years later he finally hung up his boots having smashed the club records with 669 appearances and scoring 301 goals.

Promotion to the Southern Premier was soon achieved and shortly afterwards the Ducks moved to their new Buckingham Road stadium. This gave the town a new impetus and Goulds talented squad secured the Southern League Championship in 1987/88 and gained promotion to the GM Vauxhall Conference.
United then hit the headlines again, becoming the only non-league side ever to take on the full England team, as over 6000 packed into Buckingham Road to see the Ducks take on the Three Lions. Unfortunately Uniteds brush with the non-league elite only lasted one season, after which the club were relegated to the Isthmian League.

During the period between 1985 and 1992, Aylesbury boasted the best FA Cup record of any side outside the Football League, reaching at least the First Round Proper every season. The highlights being a victory over then Division Four leaders Southend United, a narrow extra time replay defeat against Northampton Town, and being shown live across Europe against Walsall.
Ironically though, it wasnt Gould, the clubs most successful manager, who lead the Ducks to their greatest FA Cup achievement, it was his successor Steve Ketteridge in 1994/95. Once again the club became media celebrities as the Duck Walk goal celebration was shown around the world, as Aylesbury went on to reach the Third Round Proper where they lost to Premiership side Queens Park Rangers at Loftus Road.

Ketteridge delivered the Isthmian League Cup title to Aylesbury, but it was to be the beginning of a rollercoaster ride for the Buckinghamshire club. After almost going out of business, the Ducks were pipped to the Isthmian League title by Sutton United a year later, despite heading the table for long periods. The following season saw United back in administration and fighting for survival both on and off the pitch.
Despite defeating Football League side Reading in the Berks and Bucks Senior Cup, for the second time in four seasons, the club was relegated to Division One for the first time in their history.

In October 2000, the legendary Hercules took time out from his duties as the clubs Community Development Officer to manage the Ducks, and in his brief spell in charge he secured Uniteds promotion back to the Isthmian Premier Division and extended the clubs proud FA Cup record with a First Round trip to Port Vale.
2002/03 saw Aylesbury returned to national prominence twice. Firstly the club was privileged to play a major part in an England get together as the Buckingham Road facilities were used by Sven Goran Eriksson for a media conference and by the squad for a training session. Secondly the club made their first ever appearance in the semi-final of the FA Trophy, where the Ducks were beaten by eventual winners Burscough.

For varying reasons the club then began to cycle through a string of managers at an average rate of two a season - namely Chris Boothe, Kevin Wilson, Paul Curtis, Danny Nicholls, Jon Franklin, Tony Thompson and Mark Eaton.
But nothing was to match the low point of summer 2006. Former Chairman Bill Carroll failed in his plans to convert the Buckingham Road playing surface to a 3rd generation artificial surface, what he described as his last ditch idea for creating a viable football club, when the Southern League and FA baulked at his ideas.
Carroll decided to cut ties with the club he had been involved with since 1997, and popular local businessman Graham Read took over the club. But in a cruel twist Aylesbury were left homeless after their lease expired.

Since that time Aylesbury have been forced to play their home matches some twenty miles out of Aylesbury whilst the committee work hard keeping the club alive. The campaign to Bring the Ducks Home was launched in earnest, and has generated plenty of publicity, but so far, sadly, nothing concrete in terms of a new home for the club.
There are still plenty of reasons to remain positive; a glance to our near neighbours Slough Town, who now have definite plans for a new stadium in place to end their own exile, just goes to show that with patience and perseverance it can be done, and Aylesbury United will return to their rightful place eventually.
On the pitch the club continued to do remarkably well, going close to the playoff positions in the Midlands Division for the next three seasons but a new challenge arose last summer when the previous manager defected clubs, taking almost the entire playing squad with him.

This lead to another tumultuous season which saw Martin Stone initially appointed as manager, but due to personal reasons he had to renege on his appointment less than than two weeks before the first game of the season. His assistant, Byron Walton, briefly stepped into the mantle and did a sterling job in assembling a competitive team in such a short space of time. He moved on and former United defender Tony Joyce switched from Buckingham Town to become the clubs new permanent manager.
Unfortunately Joyce was unable to prevent the clubs slide - which had seen them amass just one league win by October - and the club were relegated to the Spartan South Midlands League.
The following season saw a marked improvement in the clubs performances and Joyces prediction of a top six finish proved spookily accurate as the club ended the season in exactly that position.

Season 2011/12 saw further progression in the league with the Ducks eventually finishing 4th after a strong run of results at the tail end of the season. There was disappointment, however, in the cups with the team being out of all cup competitions by mid November.
Tony has yet again strengthened the team for 2012/13 with the introduction of some more experienced players and we are hopeful of further progression both in the league and cup competitions.