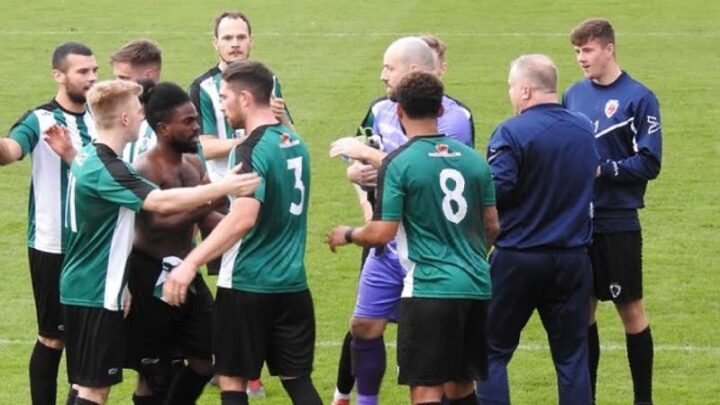 Our brand new feature, in which we look back at some of Bromsgrove Sporting’s most famous goals and get the insight from the people who scored them, continues with Jack Wilson’s free kick in our memorable 8-2 win at AFC Rushden & Diamonds in October 2019

5th October 2019. Sporting’s adventure in our maiden season at Step Three continued with a visit to Hayden Road, home to a big player at the level in AFC Rushden & Diamonds. The Rouslers’ campaign, to that point, had featured a mixture of wins, draws and losses. The last league outing was a disappointing 1-0 defeat at the Victoria Ground versus Needham Market, but a 5-0 midweek demolition job of Bedworth United in the League Cup, where new signing Mikey Taylor bagged a quickfire hat trick, gave reasons to be confident ahead of this trip to Northamptonshire…

“The build up to the game was the same as the others,” explained defender Jack Wilson.

“Bren and Mase always prepared us in the right way and made sure we treated every team the same and took no side lightly.

“We knew Rushden were going to be a strong outfit and we considered them as on one of the favourites for the league at the start of the season.

“During the week in training, Bren told me I would be playing right back for that game, and I didn’t mind as I had played there before.

“We started the game really well and was on the front foot from the get go.”

This positive start led to Mikey Taylor netting in the 11th minute, to give Bromsgrove the lead.

The home side levelled proceedings 10 minutes later, but Sporting had a chance to regain the lead, courtesy of a free kick right on the edge of the area.

An inviting proposition for many a player, but perhaps Jack Wilson’s name wouldn’t have been the first name on everybody’s list to take it.

“I remember Bren saying to us in the pre match talk that if we was to get a free kick around the edge of the box, then I should have a go.

“As I set the ball up I was actually aiming for the other corner, but I miskicked it and it rolled under the wall and into the bottom corner, but I wasn’t too bothered as they all count!

“I think it was the first free kick I’d ever took within shooting distance for Bromsgrove – so I’ve got a 100 percent record!”

The home side equalised once again, before Taylor bagged his second to put Sporting 3-2 up at the break.

An enthralling second half followed, with Rushden having two men sent off and the Rouslers adding five more to the scoreline – Taylor finished the day with four goals, whilst Nathan Hayward, Shaquille McDonald and Charlie Dowd were also amongst the scorers.

“We ended up winning the game 8-2, which was a fantastic result away from home,” added Wilson.