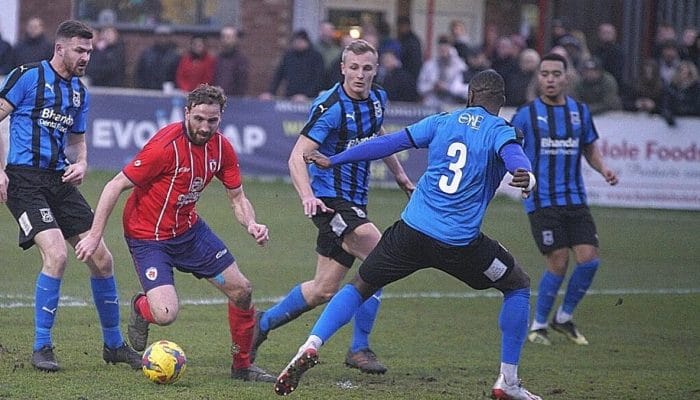 Our brand new feature, in which we look back at some of Bromsgrove Sporting’s most famous goals and get the insight from the people who scored them, continues with Tom Taylor’s goal in our emphatic 4-1 win over Stourbridge, in the Southern League Premier Central on New Year’s Day 2020.

1st January 2020. Sporting headed into this encounter in scintillating form. In all competitions, it was eight in a row unbeaten. In the league, it was seven, which included 13 points from a possible 15 in the league during December, which saw the Rouslers awarded Team of the Month. The first match of the new year was a spicy one; Stourbridge had beaten Sporting twice during the season already, in both the reverse league fixture and in the FA Cup at the Victoria Ground. So, there were some scores to settle…

For defender Tom Taylor, it was a game that he, and the whole team, were eagerly anticipating.

“It was a big game on New Year’s Day, that everyone was up for. It was a strange game for me, as Nathan (Hayward) had signed for Stourbridge and he was someone I respected and became close with whilst at Bromsgrove,” Tom said.

“It was a massive game for us, as we were pushing towards the top and were facing a well established club in the league, who had a very good team and had plenty to play for.”

The game didn’t get off to the best start for Sporting, as now-Rousler Andre Landell put the visitors ahead with a neatly taken finish.

“We started well but went behind and I really felt we were unlucky to do so. But, I thought we was going to score at some point for sure.

And score Sporting did, with Tom getting the equaliser 23 minutes in. Latching onto a long ball, he managed to make space for himself before converting via a deflection.

Tom said: “It was nice to get that goal and get back into the game. I think we caused them problems with long balls and crosses, especially with Mikey (Taylor) Leon (Broadhurst), Rich (Gregory) and myself.

“I brought it down and it all happened so quick! I remember I couldn’t quite get my shot away, but was happy when it went in – I’ll take a tap in!”

That goal gave Sporting the springboard needed to score an extra three goals, with Will Shorrock, Greg Mills and Mikey Taylor all netting to seal what was a comprehensive victory in the end.

Tom continued: “The game had everything; goals, excitement, sendings off, celebrations with (Greg) Millsy’s goal and lots of points to prove. I’m sure it was a exciting game for the fans and it was even better that we was able to get the three points.”

“I did try to find Andrew Mason (assistant manager) after the game to talk about my goal, but couldn’t find him anywhere,” Tom jested.