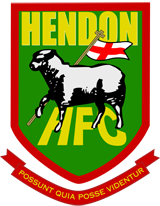 Sporting completed their schedule of pre-season friendlies with a fine win against north London side, Hendon and Miro Pais was the hero of the hour playing as a striker instead of his usual position on the wing.

Sporting were in action quickly spending much of the initial spell in the Hendon half and it was no surprise when they took the lead in the 15th minute. Will Shorrock sent a pin-point cross from the left into the box that was met by Pais with a powerful header leaving the Hendon 'keeper Dan Pernan grasping at thin air.

Ten minutes later and along came Sporting's second and an almost replica of the first though this time it was Jourdain Masidi supplying the cross that was again followed by a robust header into the net from Pais.

Indeed Pais could have got his hat-trick on 30 minutes had his beautifully executed overhead kick not bounced off the crossbar.

For the remainder of the half,  Sporting found themselves defending a bit more and the  Londoners could have got one back 10 minutes before half time but for a brilliant diving save from Ákos Onódi grabbing a fierce angled shot from the Hendon striker, Liam Brooks.

Both teams pretty much cancelled each other out for the second half and the game lost a bit of momentum as both teams made a number of substitutions but Rouslers' substitute Shama Bako put the match well beyond their opponents on 86 minutes when he found himself with just Pernan to beat and slotted home neatly wide of the 'keeper's right arm.

And so the scoreline remained at 3 - 0 when the referee, Mr Burt blew for full-time with just a couple of minutes added on.