LOCAL HERO: A good Hart these days is easy to find!

On Wednesday, the Victoria Ground was used as a backdrop on Thursday night’s edition of BBC’s The One Show, where the work of a local hero was recognised.

The VG was used to do a presentation to local resident Steve Hart, who just happens to be a Bromsgrove Sporting fan and one of our sponsors, via his company Reeltake Productions.

Each week, The One Show features somebody who has gone out of their way in helping others and volunteering, particularly during the COVID-19 pandemic.

Steve was nominated by his friends and family for his involvement with one of the local first schools, Charford First School, distribution of food parcels, his role as a first responder and his work with the Samaritans.

This week we're celebrating local hero, Steve who's gone above and beyond, from delivering food to families in crisis to completing his Samaritans training.

The camera crew arrived early in the morning to set up and Steve was “conned” into turning up to the ground for an alleged publicity shoot, only to find that he was the subject of attention.

A number of people had recorded tributes to him and these were relayed to him on a video screen, that he watched and was seen by millions on television on Thursday evening.

Club chairman, Mike Burke, did the introduction and team captain Leon Broadhurst also did a tribute, but unfortunately that was not fully transmitted, as he played second fiddle to former footballers Chris Kamara, Gary McAllister and Gordon Strachan – they all previously played for Leeds United, the team Steve supports alongside Sporting.

You can watch the full feature on the iPlayer, by clicking here (view from 16:13).

From all of us at Bromsgrove Sporting, congratulations and thank you Steve! 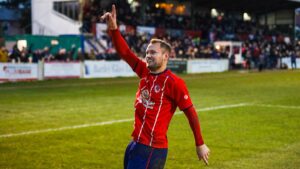 MY SPORTING GOAL: Broadhurst vs Tamworth 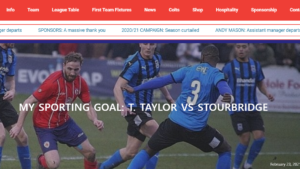 Hello and welcome to the new Bromsgrove Sporting FC website. We hope you enjoy our new look and feel. Please take a look around, and