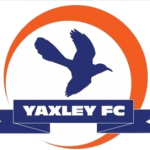 The club was formed in 1900 with the forerunner of today’s club, Yaxley Rovers, being members of the first Peterborough League campaign contested during the 1902/03 season.History up until the Second World War is not well documented and the first instance of a post-war championship came about in 1950/51 when the club won the Peterborough League Division Two. Relegation was just around the corner though, and it was back in Division Three by the end of the 1950’s.

The Club has always played either in or on the fringes of the highest levels of local leagues which, over the years have been sponsored and known by many names such as Eastern Counties, Jewson, and Peterborough League. The Cuckoo’s finished as runners-up three seasons in a row, the last of these being enough to see the club promoted to the Premier Division of the Peterborough League. The club’s first taste of Premier Division football came at the start of the 1975/76 season and once again they finished runners-up. The following season they went one better and won the Premier Division title.

1993/94 saw the purchase of the new ground and the facilities to step up to the United Counties League and the 1994/95 season was at that time, probably the most successful in its history. This was the debut season of the ill-fated West Anglian League (amalgamation of the Hunts & East Northants Leagues) and the first team won promotion to the United Counties League after winning the championship. The Reserves also won Division One of the same competition thus emulating the feat of 1984/85. During the close season floodlights were erected and a stand was put up at the Leading Drove ground. The following season saw the Division One championship come to Leading Drove.

The ‘02/03 season saw the Reserve and Youth teams win the lion’s share of league and cup silverware whilst Jim Watson took over the management of the First Team making a magnificent charge from the relegation zone of the United Counties League Premiership to finish seventh with 67 points – the club’s highest ever finishing position. The same season saw plans unveiled for new facilities that are part of a five year objective to take the club into the Dr. Martens (or equivalent) league. Plans were also made to incorporate Yaxley Juniors and establish a new Ladies team to assist in creating a community orientated football club. The ‘03/04, 04/05 and 05/06 seasons have undoubtedly been the clubs most successful ever with the 1st, Reserve, Youth, Ladies and Junior teams all bringing home trophies including at senior level, the prestigious Hinchingbrooke Cup and the UCL League Cup in May 06.

The club has achieved FA Charter Club status and was granted planning permission to redevelop the site, improving the facilities (e.g. new clubhouse and additional playing areas) to FA community standard. The project was severely delayed in 2005 resulting in significant commercial loses due to an access dispute halting the club’s entire development plan. The dispute was finally settled and the project restarted in August ’06. Season 2008-09 saw the move to more temporary accommodation.

The 09/10 season was one of the toughest in the clubs history and against most of the league pundit’s opinions, Clippo and the lads pulled survival from the jaws of relegation. The 2010-11 season was equally as hard but with the team finishing 16th in the league and completing the season with a massive 7-0 victory over Rothwell Corinthians (the biggest league score ever for the Cuckoos).

Investment developments through 2010 and early 2011 have resulted in the completion of our new facility in time for the 2011-12 season - at long last!
The 2017–18 season saw the club win the Premier Division title, earning promotion to Division One Central of the Southern League.