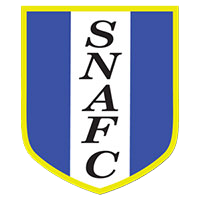 Football was first played at lees lane in the 1926/27 season playing under the name of South Normanton Miners Welfare, and progressed to the Central Alliance Football League and after into the Sutton and Skegby League.

The nickname ‘Shiners’ derives from the mid 1750’s when South Normanton was at the heart of the ribbed stocking industry. The people involved in this craft worked long hours sitting at there windows on wooden stools, so much so, that the backsides of there trousers became very shiny making them instantly recognisable as coming from the South Normanton area since then local people have been referred to and called ‘Shiners’.

Under the new name South Normanton Athletic joined the Central Midlands Football League in the 1990/91 season. The clubs first major success came in the 1993/94 season when the finished runners up in the premier division. This gained them promotion to the supreme division. The club made there first entry into the F.A Vase in the 1994/95 season.

In the 1996/97 season disaster struck when the old changing rooms where destroyed by fire. The clubs future lay in the balance and with limited time available members of the committee virtually worked round the clock to convert a derelict building into suitable changing rooms, which at the time were intended to be for a temporary period only the leagues deadline for completion was accomplished with little time to spare.

At the end of the 1996/97 season, the club was relegated due to the 3 year flood light installation rule not being met; funds set aside to complete this project had been spent in establishing new changing rooms. The floodlights were completed in 1998 and the club was reinstated back into the supreme division.

The teams best position being 3rd which was a promotion place. The club was promoted to the NCEL for the start of the 2003/2004 season where they played till the club decided to fold at the end of the 2007/08 season due to an ageing committee and no new blood coming to the club.

We have now reformed the club with a new committee, management and players. In a long time there is an air of optimism and expectancy of big and better things to come at lees lane. As one of the old committee members said “its just nice to see football being played here again”.

We now enter the eighth season under the name of the newly formed SNAFC and progress over these years has been remarkable. Under the chairmanship of Phil Bailey who has completely single handed at times, transformed the stadium into what we see today. Entry back into the pyramid system with the Central Midlands League saw the club finish 11th / 3rd / 3rd and 9th and then runners up in the Southern division. Due to Clifton failing FA ground grading regs, we were promoted to the East Midlands Counties league under the management of Mark Wilson. Mark left early in the first season for a position with Rocester but Tom Leighton took over as player manager and guided the club to a 7th position and the club won the Jenkins and Jenkins League cup. This position brought us re-entry back into the FA Cup and we were not disgraced to go out in the second preliminary round replay to EVOSTIK Lincoln United. This year we hope to go further.
Tom’s first full season in charge saw the club finish 4th after for much of the season looking favourites to win the title. A second league cup final was achieved but we lost our un neaten record in this competition to Aylestone Park 2 – 1. Last season saw us regain Step 5 status when after a long season of many ups and downs we finished second to West Bridgford FC but were offered promotion to the Midland Football League. We now hope to move to the highest level the club has reached if we can progress to step 4

The club first competed in the Vase in 1994 when in an extra preliminary round game at Home to Long Eaton United saw them win 3 – 0 to set up a game at Bradford Park Avenue (Where are they now?) eventually losing 6 – 4

The best season in the competition saw them reach round 2 Proper in 2006-7
against one of the local clubs as these early rounds are regionalised.

With the club getting the infrastructure in place we hope to make the next step to level 4 and with the help of our enthusiastic president Mike Robinson with whom we named the stadium after (M J Robinson Structures Arena) We also have a second string to the club under the name of South Normanton FC who compete in the Central Midlands South Division. We hope they can push us all the way but not overtake us.