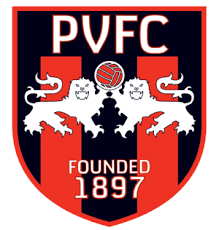 RECORDS from the Walsall Observer show that football was played in Pelsall as long ago as 1898.
The two World Wars caused a temporary halt to proceedings, but in 1961 the club reformed and this heralded the beginning of Pelsall Villa as it is known today.
Using changing facilities in the nearby Red Cow public house was never a satisfactory situation and in 1978 a liaison was formed by then Chairman, Vic Dolphin with Pelsall Cricket & Sports Club.
As a result of the link-up, Villa not only gained improved dressing rooms, but also real headquarters.

In 1982 the club left the Staffordshire County League having been accepted into the West Midlands (Regional) League Division 2.
Promotion was secured after two seasons at that level, but it was obvious that a number of improvements were needed at The Bush ground to bring it up to the required standard for an assault on the Premier Division.

During the summer of 1991 floodlights were installed and Aston Villa provided the opposition as they were officially switched on in front of a crowd of 2,000 in November 1991.

There was a real feel-good factor surrounding the club as Manager RegPriest set about the task of strengthening the playing squad and success soon followed in both the FA Cup and FA Vase competitions. In fact, Villa were within three games of making it to Wembley Stadium in the FA Vase in 1992/93 before narrowly losing out to an extra-time own goal at the hands of Buckingham Town.

The next stage of the club's ongoing development saw hard-standing ground all around the perimeter and a 500-seater stand erected at The Bush end of the ground.
The aim was to secure a place in the newly-formed Midland Football Alliance, but, having taken the West Midlands (Regional) League Premier Division title in 1994/95, the eagerly-awaited promotion was not granted.

It did arrive at the end of the following season, however, following a second-placed berth during a campaign that also saw the League Cup and Midland Invitation Cup secured.

The first season at the higher level ended with a mid-table finish as skipper, Adrian Horne won the Alliance Player of the Year as well as Programme of the Season.
A position in the middle of the table was the norm for the next few years as the club consolidated.

1998/99 saw Chairman, Vic Dolphin and club stalwart, Tony Gough resign after more than two decades of sterling service. Ron New took over the Chair in 1999/00 before relegation followed in 2003/04 as the club returned to the West Midlands (Regional) League.

There was another change of personnel 2004/05 when former player Shaun Mason returned to the club, initially as First-Team Manager then Chairman as Mark Bentley took over the First Team Managers role. Consolidation was key at this stage, with a number of unresolved issues clearly still to be sorted.

2009/10 season, the club were transferred into the Midland Combination, a new start which heralded in a new era at The Bush, playing in a different region meeting many new faces, and some old ones (Walsall Wood/Racing Club Warwick etc)

Late into season 2011/12 saw another new and exciting part to the clubs history when the Old Bush become Pelsall Villa's official home thanks to the investment by Mark Bentley/Shaun Mason who took over the Pub to enable some much sort after revenue to be made available for the club and to secure the clubs future with the issues with the Cricket Club sadly not being resolved.

Season 2012/13 sees the Club operating with five teams - First-team, Ladies, U18's and two Sunday teams - and there is certainly a feel-good factor as The Villains look to continue making progress and building on solid foundations with the intention of stimulating a sense of pride and belonging within the local community.

Season 2013/14 BIG changes, former LA Galaxy player Craig Timmins took over as First Team Manager in June, however Craig left this role in October , with Keith Russell taking over the reins until the end of the season. Other developments in and around the Football Club have taken place; the entrance to the ground has been changed with the help of committee and local people, large donations to help fund the materials have also been made.

Mark Bentley has taken up the role of Club Development Manager which includes: team recruitment, funding applications and ground development. U21's & U13's team are in place along with our newly formed Academy run by ex Premiership player and local legend Steve Hayward. Along with established First, Ladies, U18's and Sunday team this gives us real growth.

Our relationship with our neighbours Pelsall Cricket & Sports Club has not improved and such has help drive the path we are now taking, although we live in the hope that one day we will be able to become one big team and have a facility fitting for the area where we are.

Season 2014/15 saw the worst start to a season in the clubs history. Just one league win before December saw the club cut adrift at the bottom of the table. December saw a change in management with ex Bromsgrove, Hednesford and Hereford goalkeeper Scott Cooksey taking the reigns. Scott straight away bought into the clubs vision for improvement and despite continued struggles which in no uncertain terms down to the clubs poor start to the season Scott and his team managed to pull of a minor miracle by moving off the botton of the table in our final game. This subsiquently enabled us to maintain our positon in MIdland League Division 1.

We as a club now hope and luck forward to further improvements and much more happier times in the future.

Honours won by Pelsall Villa FC since reformation in 1960/61.