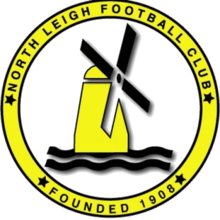 North Leigh were formed in 1908, but it was only following the Second World War that the club started to make its mark in the Witney and District League.

The club enjoyed a good first season in the Hellenic League, finishing in 4th position and being the Divisions highest goal scorers apart from Champions Cinderford Town. In the clubs second season it again achieved 4th position, averaging two points per game, scoring 84 goals in the process.

In the third season, the club finished runners up to Tuffley Rovers in Division 1 and so took its place in the Hellenic League Premier Division along with the champions.

In 1997/98 the club reached the second round of the FA Vase for the third time before losing to Elmore. They finished the season in 4th place in the Hellenic League Premier Division, and capped their season off by reaching the final of the Oxfordshire Senior Cup where they were only narrowly beaten by their West Oxfordshire rivals Witney Town 1-0 after extra time.

The season 2001/02 was without doubt been the most successful in the clubs history to date. After a superb season of consistently high performances and an epic struggle with both Gloucester United and Yate Town throughout the season to occupy top spot, the club eventually succeeded in winning for the very first time, the Premier Division title. The club also reached the final of both the Oxfordshire Senior Cup and the Hellenic League Challenge Cup.

In season 2002/03 the club went one better and with a smaller squad than the previous year and arguably stronger league opposition, retained the title with a winning margin of 10 points over Yate Town (the team pipped the previous ear) and local rivals Carterton. Unfortunately the ground at that stage was not up to the required standard for the team to take promotion to the next level.

In season 2003/04 a disappointing eighth place in the league was offset by a tremendous run in the FA Vase where the club reached the last 32 and with reasonable luck would have progressed further.

In 2004/05 the club finished in seventh place in the league, but the highlight was a truly memorable run in the FA Cup as the last Hellenic team left in the competition defeating Deal Town, Walton Casuals and Edgware Town and only losing out to Conference South outfit Newport County in Wales after holding them to a draw at Eynsham Park.

In season 2005/06 after an excellent start and leading the table during the early part of the season, the club narrowly missed out on promotion to the Southern League finishing in fourth place after a disappointing late run.

In season 2006/07 after a head to head contest with Slimbridge and narrowly finishing behind them after an epic struggle and a particularly strong finish to the season, including a double win home & away against them, the club were severely disappointed to learn of their withdrawal from promotion to the Southern League at a stage too late for them to be replaced them even though North Leighs home ground had by now received the necessary FA approval to play at the higher level.

Last season in the clubs centenary year it looked to be a mirror image of the previous year with the team vying for the top spot throughout the season and just losing out in the final push for promotion. However in a truly magnificent finish to the season the team overhauled the long term leaders of the division, Almondsbury Town in their very last league game, winning the league title and promotion on goal difference. In addition and a few weeks prior to winning the league title, the club had won the Oxfordshire Senior Cup for the first time in their history defeating an Oxford United team in the quarter final and Banbury United (Southern League Premier Division) in the final at the Kassam Stadium, Oxford.

The current first team squad is an excellent mix of a few experienced players who have played at higher levels in the game, together with some younger players all of whom have come through from the ranks of the Clubs Allied Counties youth team and Reserve team.

Improved facilities at the Eynsham Park ground include floodlights, a stand incorporating approximately 150 seats, and for the start of season 1998/99, a £100,000 changing room block including a committee room, kitchen and public toilets.

Further improvements which have been completed include significant pitch drainage work, 2 metre high ground enclosure fencing, new dugouts and turnstile spectator entrance facilities with a new 175 seater stand with disabled spectator and press facilities alongside the pitch, replacing the previous seated stand which has now been converted to undercover terracing for standing spectators.

This has helped this progressive club to consolidate its status in senior football and achieve its ambition of Southern League football.