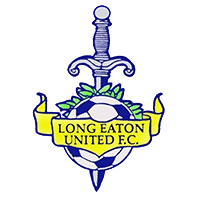 Long Eaton United has played at Grange Park, Long Eaton, since their founding in 1956. In their first season, the team—then known as The Stripes—finished second in the Central Alliance League, Division One (South), behind Skegness Town. In the clubs second season, in 1957–58, the Reserves won the Derby Senior League Cup, and in their third season, the senior team won the Division One (South) Championship. (At the time, Division One was the highest division.) In 1961–62, United were admitted to the reformed Midland Counties League, and finished in a mid-table position. Fellow Derbyshire clubs Matlock Town finished as Champions and Alfreton Town finished in last place. The reserve team took the honours the following season, winning the Central Alliance Division One Championship and the Derbyshire Divisional Cup. In 1965, United won the Derbyshire Senior Cup, beating Alfreton Town 1–0 at The Baseball Ground in Derby.

Eleven years passed before United won the Derbyshire Senior Cup again, and then Matlock Town were beaten 1–0 and 2–1 to bring the trophy back to Grange Park. But the reserves brought honours to the club by winning the Divisional Cup in seasons 1970–71 and 1971–72, and the Notts Combination Premier Division Championship.

At the end of the 1981–82 season the Midland Counties League and the Yorkshire League merged, forming the Northern Counties East League as part of the ‘pyramid’ system. Because of a lack of ground facilities, United were placed in Division One (South) and—having lost a large number of players to nearby Ilkeston Town—they struggled for three seasons, until Pete Johnson became their Manager. Under his guidance, United won a championship, were League Cup finalists (although they lost in a replay to Alfreton Town, and were promoted to the Premier Division.

In 1989–90, hampered by their lack of floodlights, United moved into the Supreme Division of the Central Midlands League, and in 1990–91 were demoted to the Premier Division. In 1992–93, however, Jim Fairley Sr., who had previously resigned after suffering a heart attack, rejoined the club as its chairman, and the club reorganised.

By 1993–94, United were back in the Supreme Division under Jim Fairley Jr., who spearheaded the formation of the clubs Youth Section. In 1996, United won enough money in the Lotttery to fund the construction of a Centre of Excellence. They began the project in 1998, installing floodlights and fencing, and building dressing rooms and multi-activity areas. In 1997, women’s football was introduced for youngsters, and today the club has two senior teams. By 2002, Grange Park had become home to more than 200 footballers, and was promoted to the Northern Counties East League Division One. This was followed by a promotion to the Premier Division at the end of the 2003–04 season.

In 2008-09 United gained runners up spot in the Northern Counties East Premier League and were also League Cup Winners that season.

In 2014–15 the club was moved laterally to the newly formed Midland Football League finishing third that season as well as lifting the Polymac Packaging League Cup beating Rocester 2-0 at Walsalls Bescot Stadium.

During that season former Deloitte partner, Nick Dargan joined the Clubs management team with the remit of helping Chairman Jim Fairley and the Committee develop a medium term business and development plan for the Club. This has culminated in significant improvements to the Clubs facilities, incorporation as a Company Limited by Guarantee from 1st June 2017 and the formation of a new Academy managed by former Ilkeston FC Academy head Paul Holland and former Boston United Academy head Steve Welsh.