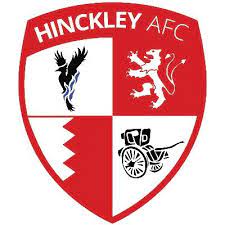 Hinckley AFC is a community owned club that was established in January 2014, following the liquidation of Hinckley United. The club aims to promote football for all in the Hinckley and Bosworth community, and is built on a structure of one vote per member. The club is committed to investing its money into football at all ages in the community, with a constitutional promise not to take any profits out of the club.
The town of Hinckley has had a football team for many years, the earliest recorded team being Hinckley Town, who played in the Leicestershire Senior League in 1889.
Following a name change to Hinckley Athletic, the club acquired land on Middlefield Lane, and in the mid-1990s they narrowly missed out on promotion to the Southern League on three occasions.
Meanwhile, Hinckley Town were formed after changing their name from Westfield Wanderers in 1972, and they were promoted to the Southern League after a successful spell in the 1980s.
In the summer of 1997, the two chairmen, Kevin Downes (Town) and Mick Voce (Athletic) established that both sides had something positive to offer a merger. Thus, Hinckley Town and Hinckley Athletic became Hinckley United.

The intention of the merger was to create a higher standard of football in the town, something which was achieved when United won promotion to the Southern League Premier Division in 2001.
After finishing in 6th place in 2003-04, United were accepted into the newly formed Conference North. They moved into a new ground, on Leicester Road, in March 2005, and the 2006-07 season was seen as the one where "The Knitters" would make a title challenge. After a successful start, tragedy struck when Matt Gadsby passed away while playing for the club at Harrogate Town on 9th September 2006. After a short break, they went on to reach the play-off final, but lost out 4-3 to Farsley Celtic after conceding a last minute penalty.
Seasons of financial woe followed, and after being relegated from the Conference North in 2012-13, the club was liquidated six months later.
The memory of Matt Gadsby lives on through his wife Sarah and daughter Amelia, who hold the membership Number One of the new club.