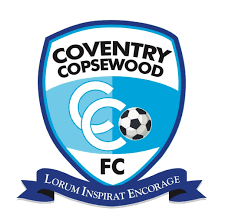 The club was formed in 1922 by employees of Peel Connor, and was known as the 'Connor'. They played in the Coventry District League until 1926 when due to an amalgamation with Magnito Ltd, they were renamed Magnet FC. They continued playing under this name until 1934 when they changed again to GEC (Cov) FC. This name stuck for longer, lasting until the 1970s when they became GPT (Coventry) FC, and then changed again in 1999 to Marconi (Coventry) FC, and then when Marconi sold off their land, it became Copsewood.

During its early years, the team played in the District and Works League, and had large success in the post war years, and then again in the 1970s when they won their league's internal cup four times, the Coventry Evening Telegraph Cup three years running and the Birmingham Junior Cup twice. In 1993 the club applied to join the Midland Football Combination. They finished 5th in each of their first five years in Division Two, but gained promotion due to their facilities. In the 1996-97 season they did the double in Division One, and were promoted to the Premier Division, where they currently play.
In the early part of the 21st century manager Paul Mills led the club to several finishes near the top of the table, and qualification to the later stages of their cup competitions, being runners up in the Telegraph Cup twice, winning the Coventry Charity Cup three times and winning the Tony Allden Cup. Since then, with the departure of Mills, they underwent a rebuilding process and finished mid-table in 2005-06, but slipped to near the bottom of the division in 2006-07. In 2008-09 they reached the final of the Coventry Telegraph Cup, losing to local rivals Nuneaton Griff on penalties at the Ricoh Arena. They also had an improved finish in the Midland Combination, finishing ninth. The reserve side were crowned champions of Coventry Alliance Two for 2008-09.