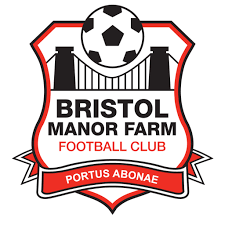 Bristol Manor Farm Football Club was formed for the 1960-61 season. After just one season, the club was disbanded but was later reformed and began playing again in the 1962-63 season. Our current home at ‘The Creek’ used to be the site of the Port of Bristol Authority Sports & Social Club and when they moved to new premises, Manor Farm took it over in 1967.

Having a permanent base of our own enabled the club to apply successfully to join the Somerset Senior League where they were to progress rapidly through the divisions before deciding to advance further to the Western League in 1977.

The club was to join the First Division for the 1977-78 season and remained there until the 1982-83 season when they won the First Division championship and gained promotion to the Premier Division, until relegation under Pete McCalls management team in 2001- 02.

The 2008/09 season kicked off with an unbeaten run of ten league matches, three draws and seven wins. During this period Manor Farm also won games in the FA Vase, Gloucestershire Challenge Trophy and Somerset Premier Cup. In September, assistant manager Geoff Bryant left the club after many years of service and in stepped Andy Davies. January saw John Black awarded with the Manager of the Month and the team were still in three cup competitions. The season ended with The Farm fifth in the table. In cup competitions, they had reached the quarter-finals of both the Gloucestershire Challenge Trophy and the Somerset Premier Cup and to the semi-final of the Les Phillips Cup.

Before the 2009-10 season even kicked off, hopes were high of beating the fifth place finish of the previous season. But the first three games all ended in draws with the team not showing the same form as last year. There were some notable moments, the 6-0 win over Sherborne Town at home and the 4-0 win against Melksham. But in the main, the Farm never looked like challenging for the top spot. It was a different matter in the FA Vase, where the club enjoyed their best success for years, making it to the Fourth Round proper when they were beaten by semi-finalists Whitehawk.

The 2010/11 season saw The Farm finish seventh in the league after challenging for a top three spot towards the end of the season. We were exempted to the second round proper of the FA Vase after last season’s run, but when our keeper went off injured, it was only a matter of time before Torpoint Athletic gained the upper hand and they ran out 7-3 winners. The FA Cup provided a lot of excitement. Winning a penalty shoot-out against Almondsbury Town and holding conference side Basingstoke Town to a draw before finally being beaten in the replay by a single goal. And it was a midweek penalty shoot-out away to Ilfracombe Town that ended our run in the Les Phillips Cup at the semi-final stage. The club won the Premier Division hospitality award, no doubt due to all those home-made cakes!

2011/12 was the most successful in the history of the club. We won the GFA Challenge Trophy after beating Shortwood United 5-0 in a thrilling final. This was followed three days later with another cup triumph when we beat Willand Rovers in extra time to lift the Les Phillips Cup.

The 2012/13 season ended in disappointment when we lost the GFA Trophy Final to Bristol Academy and finished third from bottom. Manager John Black decided to stand down.

Lee Lashenko become the new manager at the start of the 2013/14 season and quickly made an impact. The FA Cup run was a highlight of the season. Putting nine goals past Oldland Abbotonians and then seven past Lymington Town. The Corsham Town tie ended in a 4-4 draw. The hard fought replay saw us win 1-0 and then it was a tie against Bridgwater Town. Scoring all those goals in the FA Cup brought the club to the attention of The Sun newspaper. They sent a photographer to take photos of the team with the FA Cup and will be a day that everyone will remember. Against Bridgwater Town we went three up but they came back strongly and the match ended all square at four each. Our FA Cup journey then came to an end as Bridgwater won 2-1. The club continued to fight for top spot in the league and applied for promotion. The club finished second but were unsuccessful in their promotion bid when Larkhall Athletic was accepted into the Southern League. The second placed finish was the best in the club’s history. It also saw the team break the club records for the most goals scored in a season and the least goals conceded.

Season 2014-2015 was a season that the Farm targeted to gain promotion into the Southern league but it was not to be finishing in a respectable fourth position but missed out on Promotion by just 3 points which allowed Slimbridge to gain promotion. We did win the GFA County Challenge Trophy with a 2-0 win over local club Shirehampton.

Season 2015-2016 left the club with mixed feelings as on one hand we managed to get to the Quarter Final of the FA Vase narrowly going out away at Morpeth Town after winning the previous round again away at Sunderland RCA. Whilst we finished 3rd in the Western League, again we just missed out on promotion to the Southern League by one place. We did however win the GFA County Challenge Trophy for the second time in succession with a record 9-2 win over Lydney Town.